FlyNordic originates from a privately-owned airline that as of 2001 was operating between Luleå and Stockholm. Finnair purchased the majority of the company in the autumn of 2003 and with the new management a new business concept was introduced and a lowcost airline was born. At the same time the traffic program expanded dramatically with new routes to Oslo, Copenhagen, Gothenburg and Umeå.

The Boeing MD-80, a quiet, fuel-efficient twinjet entered airline service in October 1980. Its Pratt & Whitney JT8D-200 engines, combined with its efficient aerodynamic design, allow the MD-80 to meet all current noise regulations while producing operating costs among the lowest in commercial aviation.

The MD-82, which is the version flown by FlyNordic, is 45.08 meters long and accommodates 149-162 passengers. Wingspan is 32.88 m. The MD-80's nonstop range is from 2,410 to 4,345 kilometers, depending on the model. The MD-82's maximum takeoff weight is 67,812 kg.
FlyNordic operates nine aircraft of this type. Other operators range from the largest international carriers to new startup airlines and charter operators. American Airlines operates the largest number of MD-80s, a fleet of 275. Courtesy: FlyNordic 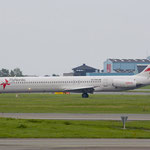